A SHORT HISTORY OF LAMOINE

Lamoine’s first permanent Caucasian settlers arrived in the 1760s. In pre-historic times, Native Americans inhabited the area year round. There is still some evidence of Indian shell heaps along the shore in Lamoine, although there has been substantial erosion. After the appearance of the white men in the area, the Native Americans began migrating inland during the winter months.

Lamoine was originally included within a much larger township. This township, which came to be called Trenton, covered an area from Card’s Brook in Ellsworth to Hancock (then a part of Sullivan)

The attraction for both the Native Americans and the early settlers was the coastline. Lamoine’s many coves and inlets made for ideal harbors. Fish and clams were plentiful. During the first half of the 1800’s, Lamoine was a major shipbuilding area. There were over sixty vessels built here, the peak years of production being reached before the Civil War, in the 1840’s.

The vessels built were primarily two-masted schooners, used for fishing and hauling freight along the coast, and to and from the Caribbean. Residents supported themselves by fishing or farming. There were other businesses supporting the shipping industry as well; logging, blacksmithing, carpentry, and general stores. 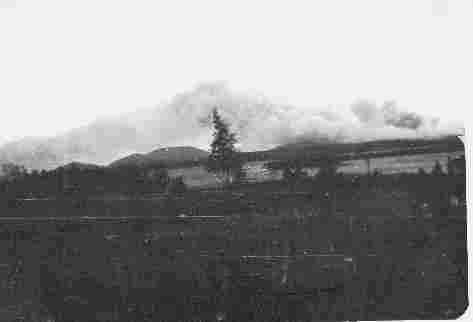 A view of the Bar Harbor Fire from Marlboro – October 1947

Most of the larger shipyards and fishing wharves were located along the Jordan River and there were several stores there. Some physical evidence remains of the many piers that were there. However, ships were built all around the shores of Lamoine: Raccoon Cove, Berry’s Cove, and even at the site of the present cemetery at Lamoine Corner.

There never was any one town center in Lamoine, but rather a collection of village areas. These all corresponded to the original shipbuilding and fishing centers. At Lamoine Corner, where the Grange Hall and Baptist Church are now, there was the largest cluster of buildings, including a two-storied Grange Hall with a store on its ground floor, a post office, the church, the Lamoine High School (where the present elementary school is now), and the Town Hall. There was an elementary school not far down the shore road.

Other village areas can be identified by their post offices: East Lamoine, North Lamoine, Marlboro, and Lamoine Beach. These areas lost their post offices when Rural Free Delivery came to Lamoine in 1904. The school population declined in the 1930’s and then rose again, and by the 1940’s the town had the current school plan.

The roads, originally, were secondary tracks between houses and villages. Most of the roads were approximately where they are now. The biggest exception was the north end of Route 184. What is now Route 184 went to Ellsworth by a different route. It went out what is now the MacQuinn Asphalt Plant road and on to Ellsworth by way of Washington Junction. The main road to Ellsworth was the current Buttermilk Road. Most travel in early Lamoine was by boat, and roads were incidental.

Fishing was the major industry in Lamoine until the end of the 1800’s. Schooners sailed to the Grand Banks during the summer months, usually with a crew of three to six men, and stayed until their holds were filled with salted fish. The cod and herring were brought back to be dried along the Jordan River, then shipped to the Boston Market. Lamoine’s fisheries were second only in importance to those of Lubec during these years.

The Civil War disrupted the economy of the area. Shipbuilding continued until the 1880’s but never again reached the peak production of the 1840’s. After the war, there was an economic boom during which time the fishing industry flourished, but, as the railroads took over most of the haulage of freight, the coastwise shipping trade declined.

In 1870, Lamoine separated from Trenton and was incorporated as a town. It was named after an early resident, Andre LeMoyne. The Marlboro section of the town remained a part of Hancock until 1933. The population reached a peak in 1880 with over 800 people, but it began to decline thereafter, reaching a low point in the 1920s and 1930s. As shipping and fishing disappeared, the Lamoine economy suffered. Many residents in the late 1880’s migrated to Massachusetts for employment in the textile mills or as carpenters or went West. There were some attempts to promote Lamoine as a summer resort, hoping to raise property values and provide seasonal employment to the residents, but the developers met with no success. Plans to bring the railroad to Lamoine were also unsuccessful.

Hopes for the town’s economy were raised when the U.S. Navy chose Lamoine as the site for a coaling station for its ships, located at the site of the current State Park. The station was completed in 1902, but was only in operation for a short while. Oil was already replacing coal as the major fuel used by the Navy. During World War I, the station was used for the storage of nitrates, used in making explosives. After that, much of the Station was dismantled for scrap. In the 1930’s the University of Maine acquired some of the buildings for a biological laboratory. It became a State Park in the 1950’s.

Around the turn of the century, ice was an important product, being harvested at Blunt’s Pond and shipped to Boston. There was also a large sardine cannery located at Lamoine Beach at this time and another smaller one at the mouth of the Skillings River at Marlboro. Neither seem to have been in operation very long. There were also two hotels in Lamoine around this time. One was Shore Acres at Lamoine Beach; the other was the Gault Hotel, located where the State Park is now.

The coast remained Lamoine’s greatest asset but now it was because of its scenic beauty. The population of summer residents grew, particularly after World War II. Many former residents who had had to move elsewhere to find employment continued to maintain summer homes here. Between the wars, many Lamoine families supported themselves with some farming and with seasonal work in neighboring resort towns, particularly Bar Harbor.

World War II brought a major change to the landscape of Lamoine as gravel pits were dug all over the town to provide gravel to build the airport in Trenton. It was not the first time gravel had been dug and sold in Lamoine; in the 1800’s there was a gravel operation near Berry’s Cove and another along the Jordan River that shipped gravel by boat. Today gravel operations have replaced fishing as Lamoine’s major natural resource industry.